ANTI-AHMADIYYA VIDEO TARGETING LITTLE CHILDREN IS GOING VIRAL TO SOW THE SEEDS OF HATRED, FANATICISM, AND BIGOTRY IN THE MINDS OF INNOCENT PAKISTANI CHILDREN 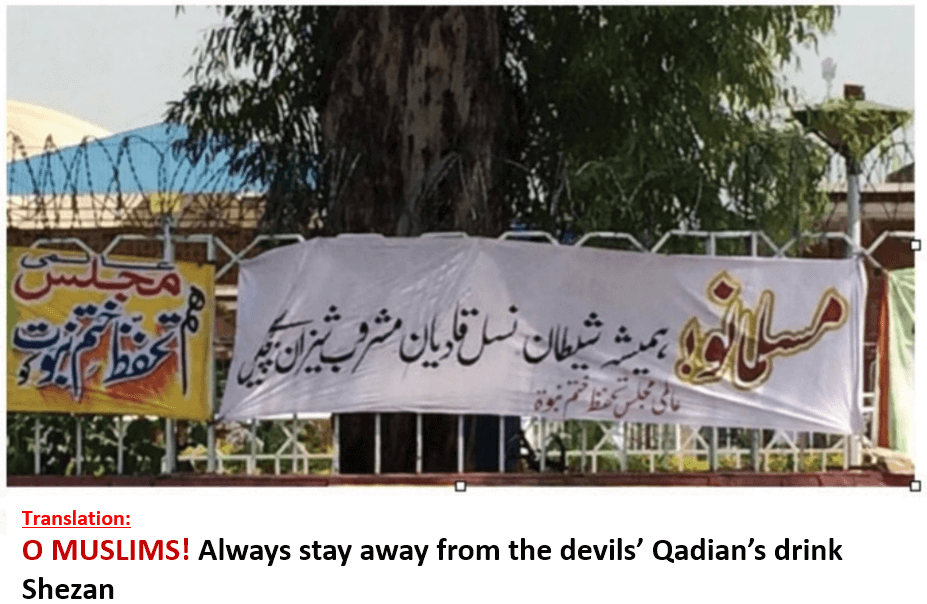 A new, anti-Ahmadiyya video targeting little children in Pakistan is going viral.  The crude animated video is meant to sow the seeds of hatred, fanaticism and bigotry in the minds of innocent Pakistani children.  Rather than teaching tolerance, the video perpetuates false stereotypes against the Ahmadiyya Muslim Community and calls on all Pakistanis, including children, to consider Ahmadi Muslims subversive and blasphemous infidels.  It also asks Pakistanis to boycott Ahmadi goods, products and services.

This video ad is inconsistent with international norms and values concerning freedom of religion and belief, as enshrined in Article 19 of the Universal Declaration of Human Rights (UDHR), on the freedom of religion, and Article 18 of the International Covenant on Civil and Political Rights (ICCPR), which was ratified by Pakistan in 2008.  Three other UN human rights treaties, as well as numerous General Assembly Resolutions and Human Rights Committee comments, prohibit religious discrimination. This video also violates Pakistan’s own National Action Plan as well as the recently enacted cybercrime laws because it fuels hatred, discrimination and persecution against members of the Ahmadiyya Muslim Community in Pakistan.

Nonetheless, the Pakistani government authorities, who continue to bring frivolous cases against Ahmadi Muslims under anti-Ahmadiyya, blasphemy, and cybercrime laws, turns a blind eye towards systematic and countrywide efforts by Islamic extremists to fan hatred and ignite violence against  Ahmadi  Muslims.  Instead of prosecuting the makers of this video under cybercrime laws and the National Action Plan, the governmental authorities continue to protect and support extremists and target innocent Ahmadis.

We call upon the Pakistani authorities to honor their international human rights commitments to protect religious freedom and promote religious tolerance towards the Ahmadiyya Muslim Community. We respectfully request all members of the international community to urge the government of Pakistan to take urgent steps to bring its laws and practices in conformity with international standards as ordained by UDHR and ICCPR.