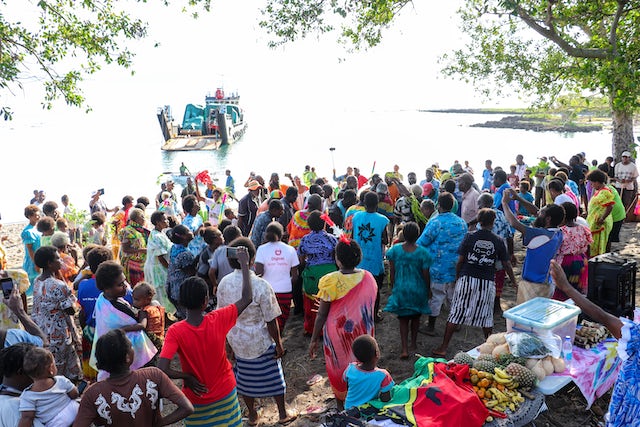 LENAKEL, Vanuatu — A boat carrying a long-awaited cargo set sail from Port Vila, the capital of Vanuatu, to the remote island of Tanna a few days ago. By the time it had reached the island, over 250 people had gathered in great anticipation for its cargo: the main components of the local Bahá’í House of Worship to be built in the town of Lenakel.

“We are so happy for this moment,” said Joseph Tuaka, a member of the Bahá’í Local Spiritual Assembly of a nearby town, after the boat arrived. “There is a traditional belief that one day the people of Tanna will pray together in one house. That day is now come.”

Nalau Manakel, a member of the Bahá’í National Spiritual Assembly of Vanuatu, stated: “Many traditional songs and stories of the people of Tanna speak of a new way of living, when all enmity will be gone, and peace and harmony will come. The emergence of a Bahá’í temple in our community points to a great change that is taking place on this island spiritually and materially.”

Speaking further about the significance of the House of Worship, Disline Iapum, the director of the temple, said: “We see the temple as a place of spiritual refuge, where we will come together to pray and draw inspiration for service to our community, in times of happiness or of crisis.”

Since the groundbreaking for the House of Worship in November 2019, many people have been coming together at the temple site to pray and offer assistance with various aspects of the project.

Some have been weaving bamboo to make the cladding for one of the surrounding auxiliary structures. Some are preparing an amphitheater for large community gatherings on a terraced slope that looks out over the Pacific Ocean. Some have been assisting with upkeep of the grounds, preventing the site from getting overgrown with the area’s lush vegetation.

, with wooden walls and a thatched roof modeled after Vanuatu’s traditional architecture, supported by a hidden steel structure. The various parts of the structure were manufactured across the islands of Vanuatu and overseas, and were prepared for assembly in the capital, Port Vila, before being transported to Tanna.

“Youth, mothers, fathers, chiefs, everyone,” said Mr. Manakel, “they come with their tools and help. And you can see in their faces that they are doing it all with joy. They know that they are contributing to something that will be of great significance to future generations.”

Since the material for the central edifice arrived in Tanna, the main steel structure has been raised on the temple site in the town of Lenakel. A glass oculus at the apex of the structure, which will pour light into the House of Worship, was the first piece to be put in position using a temporary central column. The nine wings of the roof, shaped like the deep valleys that mark the terrain of the volcanic island, were then assembled around it one by one.

Reflecting on the future, Mr. Manakel says, “The Pacific Ocean is very special. There are currently only a few Bahá’í temples in the world, and several of them have been raised or are being built on the shores of the Pacific. We hope that one day many more villages and towns across all oceans and continents will feel the joy we felt when we saw the temple arrive—like seeing a light of hope shine out from the midmost heart of the ocean.”