Lukashenko announced an attempt to “break Orthodoxy” in Belarus 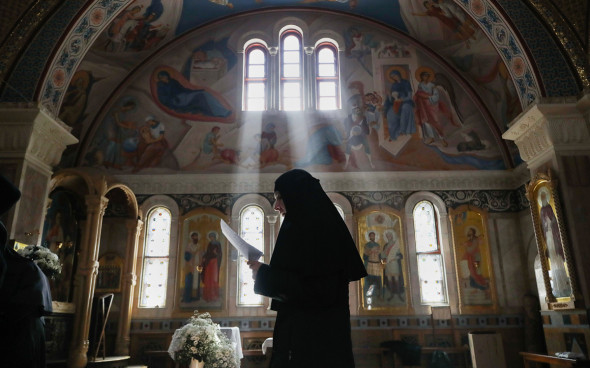 During the protests in Belarus, they tried to attract churches of different confessions, Lukashenko said. Earlier, the authorities canceled the passport of the head of the Belarusian Catholics – he was indignant that protesters were blocked in the church during the rally

External forces are trying to “break Orthodoxy” in Belarus. This was stated by Belarusian President Alexander Lukashenko at a meeting with the clergy in the Zhirovichi Monastery, BelTA informs.

According to him, now the country is going through turbulent times. Lukashenko recalled that external forces tried to “shake” and “break” Belarus, then they “moved on to a powerful information attack and economic strangulation.”

“One of them (we have seen this recently, and we have recently discussed this topic with our patriarch) is an attempt to break Orthodoxy in Belarus,” he said.

Lukashenko spoke about attempts to involve churches in undermining the situation in the country, and that many Catholic churches succumbed. Moreover, he added, there were “certain vacillations” among the Orthodox, but in the end the Orthodox Church coped with it.

In September last year, about two months after the start of mass protests in Belarus, the director of the Russian Foreign Intelligence Service (SVR) Sergei Naryshkin reported on the attempts of the US authorities to “raise anti-government sentiment” among Belarusian Catholics in order to spur those on protests.

He also warned of possible provocations that are being prepared for a clash between Catholics and Orthodox. Prior to that, the Belarusian authorities declared invalid the passport of the head of the Conference of Catholic Bishops, Metropolitan of Minsk-Mogilev Tadeusz Kondrusiewicz, which deprived him of the right to return to Belarus.

At the end of August, Kondrusevich called the actions of the security forces, who blocked the people in the Red Church in Minsk during the dispersal of the protesters, as a gross violation of the rights of believers and freedom of religion. Later, he admitted that “there is reason to believe that the presidential elections in Belarus were not fair.”

Previous Article
Elon Musk joked about the invasion of Russia
Next Article
Pope’s prayer for Lebanon: May we sink our roots in the dream of peace – Vatican News

God’s covenant is not a sweet tradition

The Council of Philippopolis (Nicene Orthodoxy and Arian Heresy)