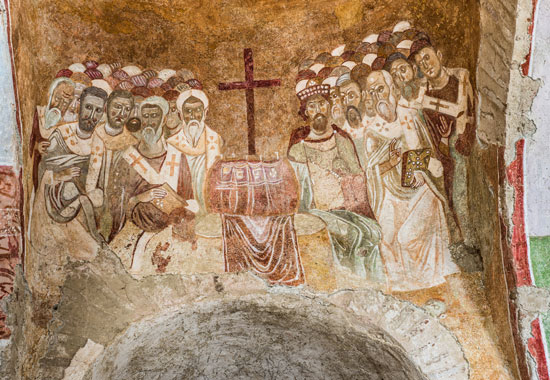 The Eastern bishops, supporters of the semi-Arian party, most of whom were members of the Council of Philippopolis in 343 with the subsequent supreme ecclesiastical forums, express precisely the pre-Nicene conservatism hostile to the term “omousios,” an innovation included in the Creed. the Ecumenical Council. This is one of the main reasons and explanations for the high intensity of church councils in the IV century due to the many anti-Trinitarian heresies and false teachings, in particular the teachings of Arius and his derivatives. Heresies seem to be multiplying, which in turn multiplies the convening of pro and contra fairs, each of them.

Among the bishops gathered in Philippopolis, many came from the Eusevian coalition. For the followers of Eusebius of Nicomedia, there were no longer any theological problems with Arius after he returned from exile with the permission of the emperor. Constantine I at the cost of a religion in which his most extreme views were excluded. The main postulate in their doctrine was the semi-Arian view that the Son had a substance similar to the substance of the Father (omiusios) contrary to the view of the Aecians /in the name of the Antiochian deacon Aetius, who revived classical Arianism /and the Eunomians/ epi in the name of Euphnius. Kizik in Moesia/, according to which no news on the question of the substantiality of the Son can be accepted, because the Son is of a completely different substance from that of the Father /heterousios/ and is an anomios from His Father. Acacius of Caesarea is a representative of pure classical Arianism with his talent and erudition. He is known as the leader of the Eusevian party at a series of councils: in Antioch  /341/, in Philippopolis /343/, in Milan /355/, in Antioch /358/. At the synods of 359 and 360, respectively in Seleucia and Constantinople, he became the progenitor of a new sectarian branch – that of the Acacians (cf. Dictionnaire de Theologie catholique – DTC, Fasc. II, P., 1909, col. 290). The latter preached semi-Arian views, adhering to the term “omios”, in the sense of similar, whence comes the other name by which they are known in church history “omians”. The technical term “omios” meant similar to the Father not in substance, but referred to a similarity in the will (cf. DTC, Fasc. II, P., 1909, col. 290-292; Lacan M.-F ., Petite Encyclopedie Religieuse, Fayard, Paris, 1973, p. 163). The heads of many ancient episcopal bishops in Thrace (Rule 6 of the First Ecumenical Council determined five provinces in Thrace with the capital Heraclia or Heraclea, Heraclia, with its own metropolitan, and Balsamon in the interpretation of Rule 3 of the Second Ecumenical Council testified that from ancient times the bishop of the city of Byzantium – Byzantium was appointed by the Thracian Metropolitan until the adoption of this canon, with which he was equated in advantages and honor with the Roman bishop) in today’s Bulgaria are among the signatories of the decisions of the Eastern Council in Philippopolis (one of the first early Christian centers and an episcopal settlement not only on the territory of today’s Bulgaria, but also in the world): Ep. Eutychius of Philippopolis (+ ca. 347), successor of the disciple of St. Apostle Paul – St. Apostle Hermas /cf. Rom. 16:14/, one of the 70 apostles of Christ; ep. Demophilus of Beroe (now Stara Zagora), successor of the first bishop – the student of ap. Paul, Carp /cf. 2 Tim.4: 13/; in Odessos (now Varna) and in the Thracian city of Heraclea the first bishop was the apostolic disciple martyr. Amplius /cf. Rom. 16: 8/, whence they take part and sign the Eastern Encyclical of Philippopolis, ep. Theodore of Heraclea (hence the Arian bishop Sabin of Heraclia, who left us the valuable source from the IV century for the councils of the Arians “Synagogues of the Councils”) and bishop Timothy of Anhialo (Ankila). It is difficult to accept that all these hierarchs, who accepted their episcopal chairs from the earliest Christian epoch by apostolic succession, have completely and at the same time departed from the correct teaching of Christ.

Rather, they were strongly attached to the ancient religion before the Nicene Creed and reacted sharply to the innovations made at the time, as well as to attempts to establish papal supremacy at the Council of Serdica. The perspective of the decisions of Philippopolis was based on the canonical order established by the Ecumenical Council of Nicaea and the local Council of Antioch, while the decisions of Serdica are in the perspective of the bishop’s obligation to defend the pure Nicene faith.

Dr. Petar Gramatikov is the Editor in Chief and Director of The European Times. He is a member of the Union of Bulgarian Reporters. Dr. Gramatikov has more than 20 years of Academic experience in different institutions for higher education in Bulgaria. He also examined lectures, related to theoretical problems involved in the application of international law in religious law where a special focus has been given to the legal framework of New Religious Movements, freedom of religion and self-determination, and State-Church relations for plural-ethnic states. In addition to his professional and academic experience, Dr. Gramatikov has more than 10 years Media experience where he hold a positions as Editor of a tourism quarterly periodical “Club Orpheus” magazine – “ORPHEUS CLUB Wellness” PLC, Plovdiv; Consultant and author of religious lectures for the specialized rubric for deaf people at the Bulgarian National Television and has been Accredited as a journalist from “Help the Needy” Public Newspaper at the United Nations Office in Geneva, Switzerland.