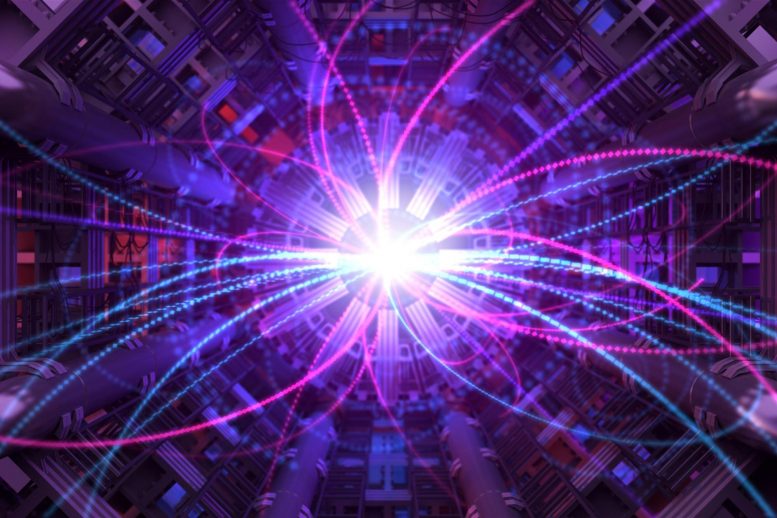 Using a groundbreaking new technique at the National Institute of Standards and Technology (NIST), an international collaboration led by NIST researchers has revealed previously unrecognized properties of technologically crucial silicon crystals and uncovered new information about an important subatomic particle and a long-theorized fifth force of nature.

By aiming subatomic particles known as neutrons at silicon crystals and monitoring the outcome with exquisite sensitivity, the NIST scientists were able to obtain three extraordinary results: the first measurement of a key neutron property in 20 years using a unique method; the highest-precision measurements of the effects of heat-related vibrations in a silicon crystal; and limits on the strength of a possible “fifth force” beyond standard physics theories.

The researchers report their findings in the journal Science.

To obtain information about crystalline materials at the atomic scale, scientists typically aim a beam of particles (such as X-rays, electrons, or neutrons) at the crystal and detect the beam’s angles, intensities, and patterns as it passes through or ricochets off planes in the crystal’s lattice-like atomic geometry.

As neutrons pass through a crystal, they create two different standing waves – one along atomic planes and one between them. The interaction of these waves affects the path of the neutron, revealing aspects of the crystal structure. Credit: NIST

That information is critically important for characterizing the electronic, mechanical and magnetic properties of microchip components and various novel nanomaterials for next-generation applications including quantum computing. A great deal is known already, but continued progress requires increasingly detailed knowledge.

“A vastly improved understanding of the crystal structure of silicon, the ‘universal’ substrate or foundation material on which everything is built, will be crucial in understanding the nature of components operating near the point at which the accuracy of measurements is limited by quantum effects,” said NIST senior project scientist Michael Huber.

Like all quantum objects, neutrons have both point-like particle and wave properties. As a neutron travels through the crystal, it forms standing waves (like a plucked guitar string) both in between and on top of rows or sheets of atoms called Bragg planes. When waves from each of the two routes combine, or “interfere” in the parlance of physics, they create faint patterns called pendellösung oscillations that provide insights into the forces that neutrons experience inside the crystal. 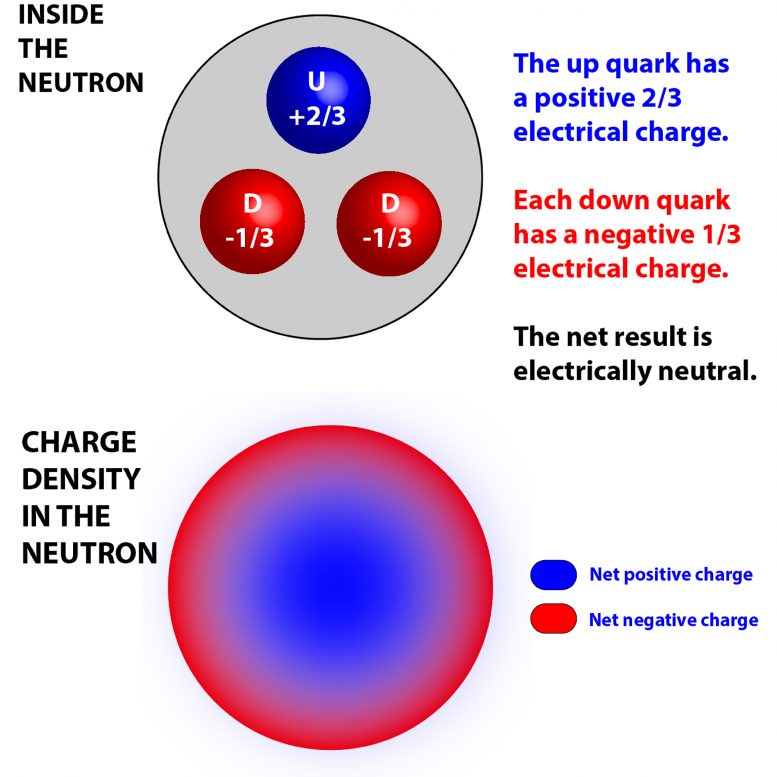 Each neutron in an atomic nucleus is made up of three elementary particles called quarks. The three quarks’ electrical charge sum to zero, making it electrically neutral. But the distribution of those charges is such that positive charges are more likely to be found in the center of the neutron, and negative charges toward the outside. Credit: NIST

“Imagine two identical guitars,” said Huber. “Pluck them the same way, and as the strings vibrate, drive one down a road with speed bumps — that is, along the planes of atoms in the lattice — and drive the other down a road of the same length without the speed bumps — analogous to moving between the lattice planes. Comparing the sounds from both guitars tells us something about the speed bumps: how big they are, how smooth, and do they have interesting shapes?”

The latest work, which was conducted at the NIST Center for Neutron Research (NCNR) in Gaithersburg, Maryland, in collaboration with researchers from Japan, the U.S. and Canada, resulted in a fourfold improvement in precision measurement of the silicon crystal structure.

In one striking result, the scientists measured the electrical “charge radius” of the neutron in a new way with an uncertainty in the radius value competitive with the most-precise prior results using other methods. Neutrons are electrically neutral, as their name suggests. But they are composite objects made up of three elementary charged particles called quarks with different electrical properties that are not exactly uniformly distributed.

As a result, predominantly negative charge from one kind of quark tends to be located toward the outer part of the neutron, whereas net positive charge is located toward the center. The distance between those two concentrations is the “charge radius.” That dimension, important to fundamental physics, has been measured by similar types of experiments whose results differ significantly. The new pendellösung data is unaffected by the factors thought to lead to these discrepancies. 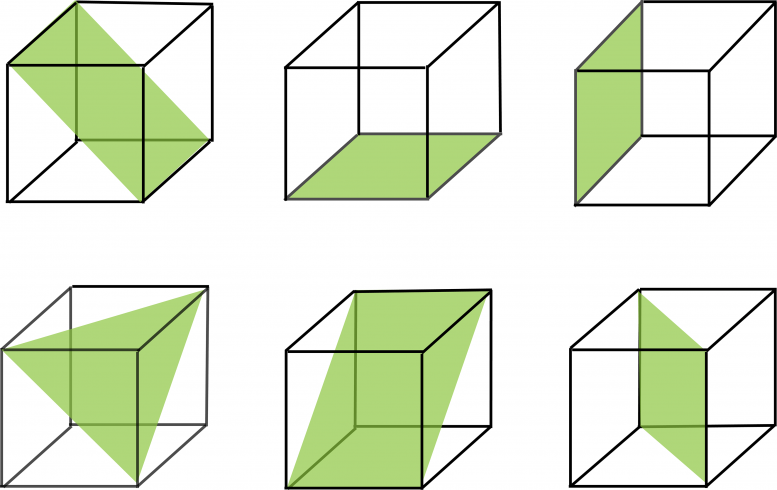 In a regular crystal such as silicon, there are many parallel sheets of atoms, each of which forms a plane. Probing different planes with neutrons reveals different aspects of the crystal. Credit: NIST

Measuring the pendellösung oscillations in an electrically charged environment provides a unique way to gauge the charge radius. “When the neutron is in the crystal, it is well within the atomic electric cloud,” said NIST’s Benjamin Heacock, the first author on the Science paper.

“In there, because the distances between charges are so small, the interatomic electric fields are enormous, on the order of a hundred million volts per centimeter. Because of that very, very large field, our technique is sensitive to the fact that the neutron behaves like a spherical composite particle with a slightly positive core and a slightly negative surrounding shell.”

A valuable alternative to neutrons is X-ray scattering. But its accuracy has been limited by atomic motion caused by heat. Thermal vibration causes the distances between crystal planes to keep changing, and thus changes the interference patterns being measured.

The scientists employed neutron pendellösung oscillation measurements to test the values predicted by X-ray scattering models and found that some significantly underestimate the magnitude of the vibration.

The results provide valuable complementary information for both x-ray and neutron scattering. “Neutrons interact almost entirely with  the protons and neutrons at the centers, or nuclei, of the atoms,” Huber said, “and x-rays reveal how the electrons are arranged between the nuclei. This complementary knowledge deepens our understanding.

“One reason our measurements are so sensitive is that neutrons penetrate much deeper into the crystal than x-rays – a centimeter or more – and thus measures a much larger assembly of nuclei.  We have found evidence that the nuclei and electrons may not vibrate rigidly, as is commonly assumed. That shifts our understanding on the how silicon atoms interact with one another inside a crystal lattice.”

The Standard Model is the current, widely accepted theory of how particles and forces interact at the smallest scales. But it’s an incomplete explanation of how nature works, and scientists suspect there is more to the universe than the theory describes.

The Standard Model describes three fundamental forces in nature: electromagnetic, strong and weak. Each force operates through the action of “carrier particles.” For example, the photon is the force carrier for the electromagnetic force. But the Standard Model has yet to incorporate gravity in its description of nature. Furthermore, some experiments and theories suggest the possible presence of a fifth force.

“Generally, if there’s a force carrier, the length scale over which it acts is inversely proportional to its mass,” meaning it can only influence other particles over a limited range, Heacock said. But the photon, which has no mass, can act over an unlimited range. “So, if we can bracket the range over which it might act, we can limit its strength.” The scientists’ results improve constraints on the strength of a potential fifth force by tenfold over a length scale between 0.02 nanometers (nm, billionths of a meter) and 10 nm, giving fifth-force hunters a narrowed range over which to look.

The researchers are already planning more expansive pendellösung measurements using both silicon and germanium. They expect a possible factor of five reduction in their measurement uncertainties, which could produce the most precise measurement of the neutron charge radius to date and further constrain — or discover — a fifth force. They also plan to perform a cryogenic version of the experiment, which would lend insight into how the crystal atoms behave in their so-called “quantum ground state,” which accounts for the fact that quantum objects are never perfectly still, even at temperatures approaching absolute zero.