Long-Lasting Disinfectant Protects Against Viruses for Up to 7 Days An alum and several researchers at UCF have used nanotechnology to develop the cleaning agent, which protects against seven viruses for up to seven days.

UCF researchers have developed a nanoparticle-based disinfectant that can continuously kill viruses on a surface for up to seven days – a discovery that could be a powerful weapon against COVID-19 and other emerging pathogenic viruses.

The findings, by a multidisciplinary team of the university’s virus and engineering experts and the leader of an Orlando technology firm, were published this week in  ACS Nano, a journal of the American Chemical Society.

Christina Drake ’07PhD, founder of Kismet Technologies, was inspired to develop the disinfectant after making a trip to the grocery store in the early days of the pandemic. There she saw a worker spraying disinfectant on a refrigerator handle, then wiping off the spray immediately.

“Initially my thought was to develop a fast-acting disinfectant,” she says, “but we spoke to consumers, such as doctors and dentists, to find out what they really wanted from a disinfectant. What mattered the most to them was something long-lasting that would continue to disinfect high-touch areas like doorhandles and floors long after application.” 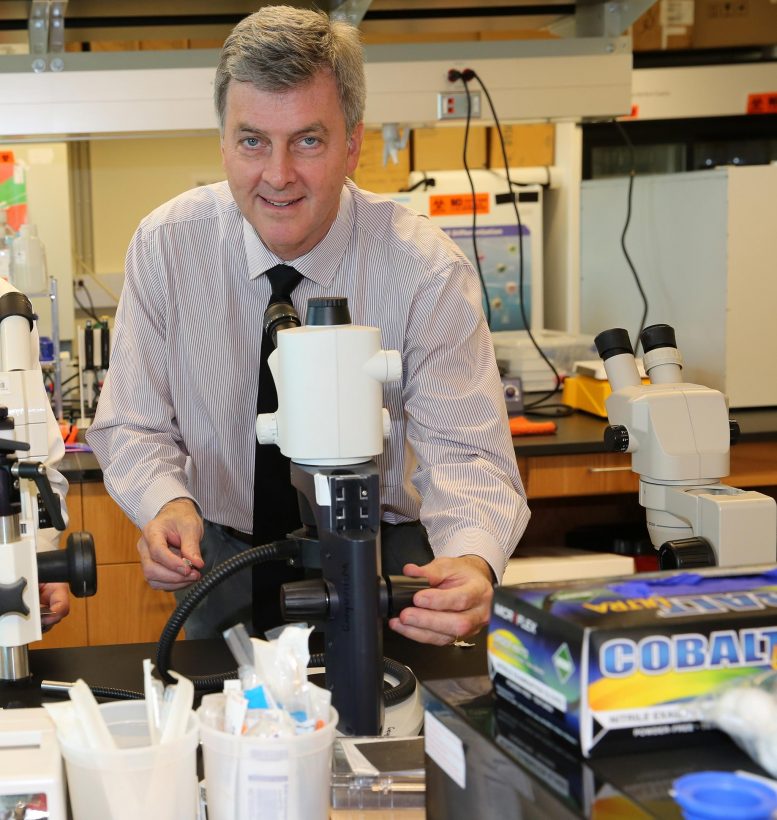 Dr. Griff Parks, a College of Medicine virologist, partnered with an engineer and entrepreneur to develop the disinfectant. Credit: University of Central Florida

Drake partnered with Sudipta Seal, a UCF materials engineer and nanoscience expert, and Griff Parks, a College of Medicine virologist who is also associate dean of research and director of the Burnett School of Biomedical Sciences. With funding from the U.S. National Science Foundation, Kismet Tech and the Florida High Tech Corridor, the researchers created a nanoparticle-engineered disinfectant.

Its active ingredient is an engineered nanostructure called cerium oxide, which is known for its regenerative antioxidant properties. The cerium oxide nanoparticles are modified with small amounts of silver to make them more potent against pathogens. 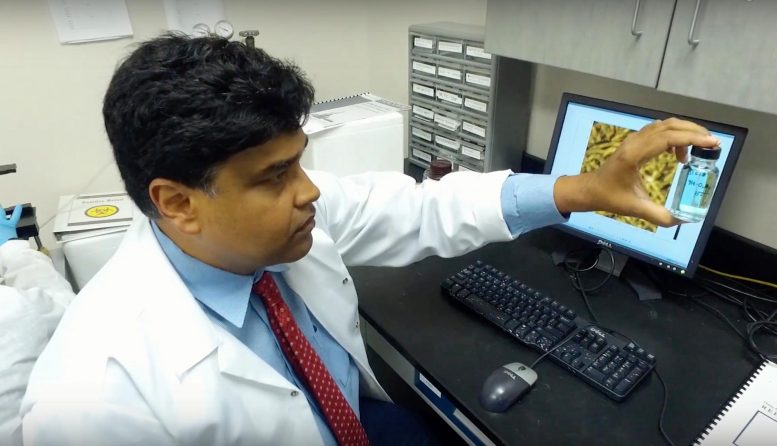 Sudipta Seal is a UCF materials engineer and nanosciences expert, who has been studying nanotechnology for the past 20 years. Credit: University of Central Florida

“It works both chemically and mechanically,” says Seal, who has been studying nanotechnology for more than 20 years. “The nanoparticles emit electrons that oxidize the virus, rendering it inactive. Mechanically, they also attach themselves to the virus and rupture the surface, almost like popping a balloon.”

Most disinfecting wipes or sprays will disinfect a surface within three to six minutes of application but have no residual effects. This means surfaces need to be wiped down repeatedly to stay clean from a number of viruses, like COVID-19. The nanoparticle formulation maintains its ability to inactivate microbes and continues to disinfect a surface for up to seven days after a single application. 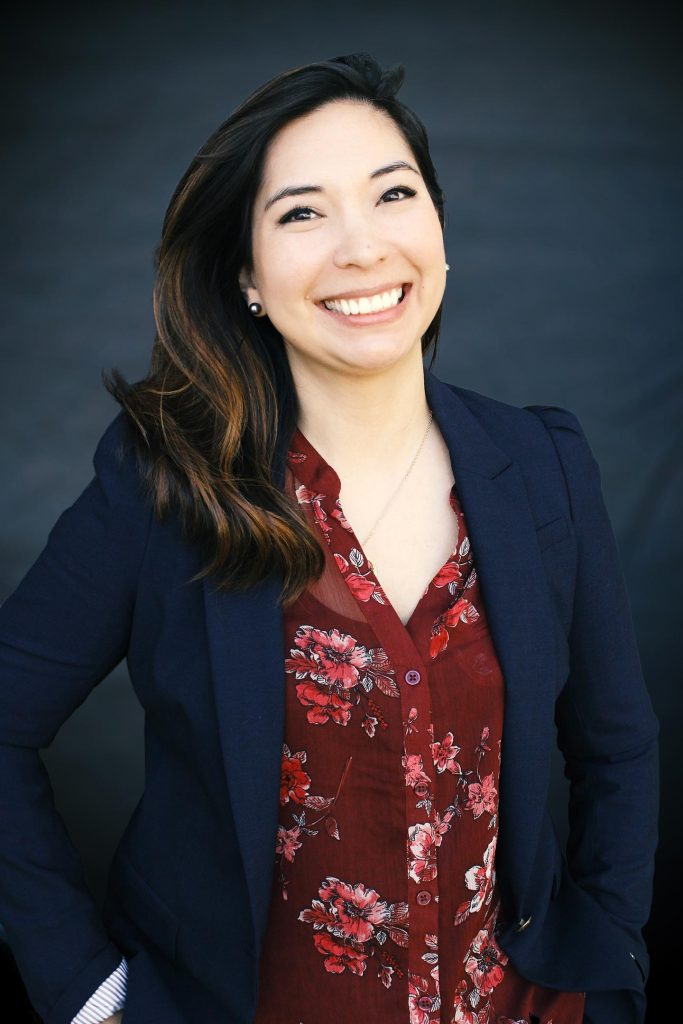 “The disinfectant has shown tremendous antiviral activity against seven different viruses,” says Parks, whose lab was responsible for testing the formulation against “a dictionary” of viruses. “Not only did it show antiviral properties toward coronavirus and rhinovirus, but it also proved effective against a wide range of other viruses with different structures and complexities. We are hopeful that with this amazing range of killing capacity, this disinfectant will also be a highly effective tool against other new emerging viruses. “

The scientists are confident the solution will have a major impact in health care settings in particular, reducing the rate of hospital acquired infections, such as Methicillin-resistant Staphylococcus Aureus (MRSA), Pseudomonas aeruginosa and Clostridium difficile – which affect more than one in 30 patients admitted to U.S. hospitals.

And unlike many commercial disinfectants, the formulation has no harmful chemicals, which indicates it will be safe to use on any surface. Regulatory testing for irritancy on skin and eye cells, as required by the U.S. Environmental Protection Agency, showed no harmful effects.

“Many household disinfectants currently available contain chemicals that can be harmful to the body with repeated exposure,” Drake says. “Our nanoparticle-based product will have a high safety rating will play a major role in reducing overall chemical exposure for humans.”

More research is needed before the product can go to market, which is why the next phase of the study will look at how the disinfectant performs outside of the lab in real world applications. That work will look at how the disinfectant is affected by external factors such as temperature or sunlight. The team is in talks with a local hospital network to test the product in their facilities.

“We’re also exploring developing a semi-permanent film to see if we can coat and seal a hospital floor or door handles, areas where you need things to be disinfected and even with aggressive and persistent contact,” Drake says.

Seal joined UCF’s Department of Materials Science and Engineering, which is part of UCF’s College of Engineering and Computer Science, in 1997. He has an appointment at the College of Medicine and is a member of UCF’s Biionix Cluster, which focuses on advancing medical technology for prosthetics. He is the former director of UCF’s Nanoscience Technology Center and Advanced Materials Processing Analysis Center. He received his doctorate in materials engineering with a minor in biochemistry from the University of Wisconsin and was a postdoctoral fellow at the Lawrence Berkeley National Laboratory at the University of California Berkeley.

Parks came to UCF in 2014 after 20 years at the Wake Forest School of Medicine, where he was professor and chairman of the Department of Microbiology and Immunology. He earned his doctorate in biochemistry at the University of Wisconsin and was an American Cancer Society Fellow at Northwestern University.

Like Loading...
Tags:
Previous Article
Mice Can Actually Learn Much Faster than Previously Thought
Next Article
NASA at Your Table: Where Food Meets Methane and the Greenhouse Effect