Mice Can Actually Learn Much Faster than Previously Thought 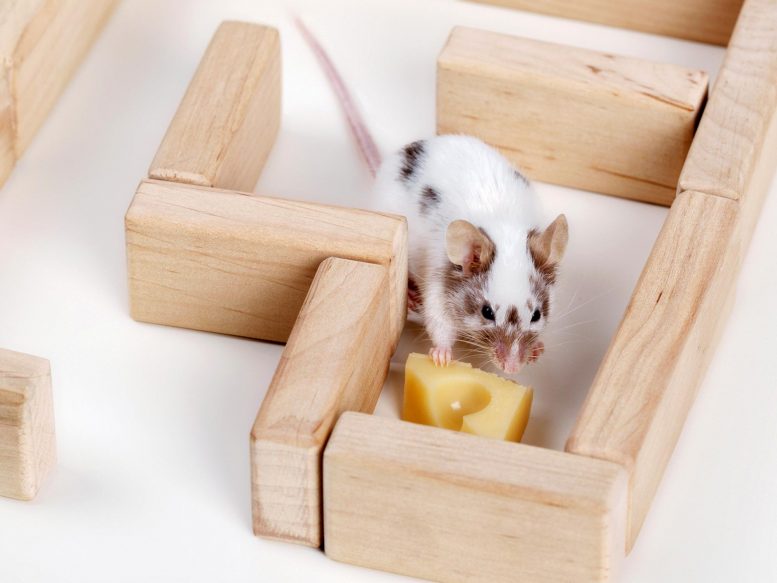 A new experimental setup for studying animal behavior and learning.

Your commute to work may seem like a mundane thing, but it is a great example of the complicated tasks our brains must carry out on a daily basis: navigation, memory, decision-making, sensory processing, and so on. Researchers often use animal models, such as mice, to study the neural processes underlying these behaviors. However, many of the tasks used to study learning in mice are not “natural”—they are not behaviors that a mouse might do in the course of its life.

Caltech researchers have now conducted a study in which they measured how mice navigate a complicated labyrinth, suggesting a new framework with which to study complex animal behaviors and learning. The mice rapidly learned how to navigate this unfamiliar environment about 1,000 times faster than mice generally learn simple yet unnatural tasks. The study has implications for how we think about the brain and the body’s role in intelligence. Interestingly, Caltech graduate students performed similarly to mice in navigating a simulated version of the same maze.

The research is a collaboration between the laboratories of Markus Meister (PhD ’87), Anne P. and Benjamin F. Biaggini Professor of Biological Sciences, and Pietro Perona, Allen E. Puckett Professor of Electrical Engineering. A paper describing the study appeared online in the journal eLife on July 21, 2021.

“Over the last few years, we’ve been trying to develop experimental approaches that are more respectful of the complexity of natural animal behavior, things that are more similar to what animals do in the real world,” says Meister.

Led by graduate students Matthew Rosenberg and Tony Zhang, the team developed a complex maze for the mice to explore, featuring 63 decision junctions and 64 possible endpoints. Within the maze is a water port that dispenses a small drop of water. The researchers gave an individual mouse access to the maze from its home cage and allowed it to explore as it desired for one night. A video camera tracked the mouse’s movements and quantified the exploratory behavior.

“In this study, we expose a mouse to a complex labyrinth environment, turn on a camera, and just walk out of the room,” says Meister. “We don’t exert any influence on the animal. We just come back seven hours later and analyze videos of what the mouse did during that time. We allow the mouse to make the kinds of decisions that mice make rather than force them to accept some abstract task that really has no relevance.”

In about half of these experiments, the mouse was thirsty and could be assumed to be motivated by a drive to find water. In the other half, the mice were sated. Though a thirsty mouse does not know there is water located inside, it will explore the maze methodically. After first discovering the water port, the mouse takes on average only 10 tries to figure out the most efficient, direct route to the port from its home cage. The most direct route requires six correct decisions.

The 19 mice used in the study all tended to follow certain “rules of exploration.” For example, when encountering a juncture, a mouse can choose to go left, right, or back the way it came. All 19 mice had a strong preference to keep moving forward and not turn around. Additionally, the mice tended to alternate taking lefts and rights when exploring. Whether these “rules” resulted from experiences or if they are genetically hardwired into the brain remains to be discovered.

Rosenberg and Zhang then created a replica of the maze as a video game and invited their grad student lab mates to explore the labyrinth digitally. The students performed similarly to mice, learning how to navigate after a similar number of successful experiences.

A key component of the mice’s “rapid” learning is a phenomenon that the researchers dubbed “sudden insight.” In more traditional mouse learning experiments, such as the steering wheel task, the lab mouse will tend to learn slowly, gradually improving at doing the task correctly. But in the labyrinth paradigm, each mouse showed a kind of “lightbulb moment,” where they appeared to suddenly understand how to navigate the maze.

“We see that for most rewarded mice—those for whom thirst may have been a driving force—all of a sudden something ‘clicks’ for them,” says Zhang. “After this aha moment, the animals begin taking complex yet direct paths to the water location much more frequently, indicating that they’re putting their knowledge about navigating the maze all together.”

“We’ve found a way to design a task that taps into the mice’s core capabilities,” says Rosenberg. “Some people might say that mice are dumb, but if you tap into their core evolutionary niche, you have the opportunity to observe skilled behavior. This allows us to get a true understanding of how learning is happening.”

The paper is titled “Mice in a labyrinth: Rapid learning, sudden insight, and efficient exploration.” Graduate students Matthew Rosenberg and Tony Zhang are co-first authors. Additional co-authors are Perona and Meister. Funding was provided by the Simons Collaboration on the Global Brain, the National Science Foundation, and Google. Meister and Perona are affiliated faculty members with the Tianqiao and Chrissy Chen Institute for Neuroscience at Caltech.

Like Loading...
Tags:
Previous Article
Chemistry Breakthrough: Faster and Cheaper Ethanol-to-Jet-Fuel on the Horizon
Next Article
Long-Lasting Disinfectant Protects Against Viruses for Up to 7 Days