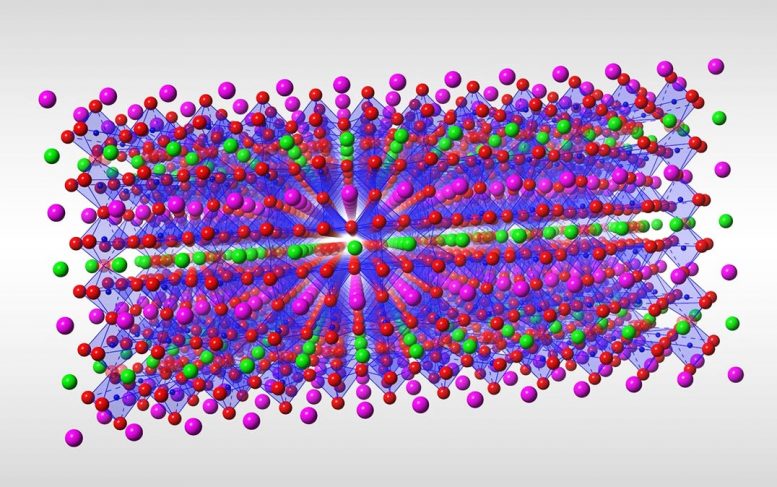 Researchers from the University of Tsukuba, Tokyo Institute of Technology, Hiroshima Institute of Technology, et al. induced substantial motion of oxide ions within perovskite crystals by using pulses of ultraviolet light. Such motion provides a means to store energy in the crystals. This development will help researchers improve the functionality of solid-state electrolytes in batteries and fuel cells. Credit: University of Tsukuba

Researchers from the University of Tsukuba use ultraviolet light pulses to access ion conductor properties that are otherwise difficult to safely attain.

Automotive and other industries are hard at work improving the performance of rechargeable batteries and fuel cells. Now, researchers from Japan have made a discovery that will enable new possibilities for future environmental stability in this line of work.

In a study recently published in Applied Materials Today, researchers from the University of Tsukuba have revealed that ultraviolet light can modulate oxide ion transport in a perovskite crystal at room temperature, and in so doing have introduced a previously inaccessible area of research.

The performance of battery and fuel cell electrolytes depends on the motions of electrons and ions within the electrolyte. Modulating the motion of oxide ions within the electrolyte could enhance future battery and fuel cell functionality—for example, by increasing the efficiency of the energy storage and output. Use of light to modulate the motions of ions—which expands the source of possible energy inputs—has only been demonstrated to date for small ions such as protons. Overcoming this limitation of attainable ion motions is something the researchers at the University of Tsukuba aimed to address.

“Traditionally, transport of heavy atoms and ions in solid-state materials has been challenging,” says co-senior author of the study Professor Masaki Hada. “We set out to devise an easy means to do so in a way that seamlessly integrates with sustainable energy inputs.”

To do this, the researchers focused on cobalt double-perovskite crystals that are similar to common materials in fuel cell research. They found that shining ultraviolet light on the crystals at room temperature displaces oxide ions without destroying the crystals, meaning that the function of the crystals was retained.

“Electron diffraction results, spectroscopy results, and corresponding calculations confirmed this interpretation,” explains Professor Hada. “At a delivered energy of 2 millijoules per square centimeter, approximately 6% of the oxide ions undergo substantial disorder in the crystals within several picoseconds, without damaging the crystal.”

Cobalt–oxygen bonds ordinarily dramatically restrict oxide motion, but ultraviolet-light-induced electron transfer can break these bonds. This facilitates oxide ion motion in a way that accesses several states that are pertinent to storing the light energy input.

These results have diverse applications. A greater understanding of how to use light to manipulate crystal structures that are pertinent to energy storage, in a way that does not damage the crystals, will bring about new possibilities in commercial-scale renewable energy systems.