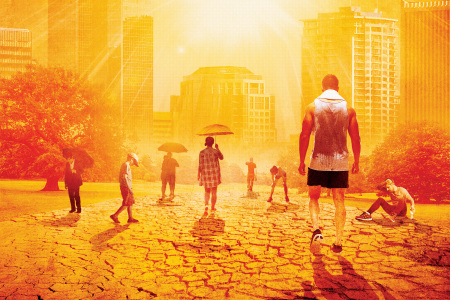 Researchers from the United States found that in 2019 alone, 356 thousand people died due to extreme heat around the world. They warn that the number could rise.

The scientists noted that extreme heat is becoming more common worldwide, with an increase in heat-related deaths and illnesses expected. The authors of the new Heat and Health study, published in The Lancet, recommend an urgent and urgent, globally coordinated effort to mitigate climate change and build resilience to extreme heat.

When exposed to extreme heat stress, the body’s ability to regulate core temperature is reduced, resulting in heatstroke. In addition, physiological thermoregulatory responses, which are involved in protecting body temperature, induce other types of stress and can lead to cardiorespiratory disease.

Extreme heat waves also reduce labor productivity, affecting more than 1 billion people who live and work in heat-affected regions. These workers often report reduced productivity due to heat stress, many of them are involved in manual labor and are unable to take rest breaks or other measures to mitigate the effects of heat exposure.

“Dealing with extreme heat requires two strategic approaches. One is mitigating the effects of climate change by reducing carbon emissions and countering further warming of the planet. Another is identifying timely and effective prevention and response measures, especially in low-resource settings. Considering that by the end of this century, more than half of the world’s population will be exposed to dangerous heat for weeks every year, we need to find ways to effectively and sustainably cool people, “- said co-author Professor Christy Eby of the University of Washington (USA).