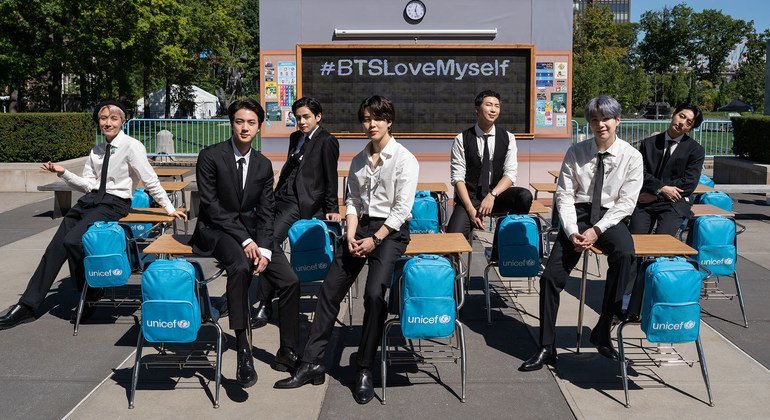 Since 2017, a campaign by South Korean superstars BTS, and the UN Children’s Fund (UNICEF) has reached almost every country in the world with a positive message of self-love and self-care, gathering more than 50 million interactions from Twitter users.
“We started LOVE MYSELF as a way to reach young people and help improve their lives and rights”, said BTS, in a press release.

“During the process, we also strove to ‘LOVE MYSELF’ ourselves, and we as a team and as individuals grew as well. We hope that many people felt how the love received from others can become the power that allows them to love themselves”, they added.

The world-famous K-pop band and its record label, BIGHIT MUSIC, joined forces with UNICEF four years ago with the collective goal of helping end violence, abuse and bullying, and to promote self-esteem and well-being among children and young people globally.

The band, who recently made worldwide headlines after participating and recording a viral music video during the 76th United Nations General Assembly opening week, has raised $3.6 million for UNICEF’s work to end violence.

They have also dedicated booths at their concert venues worldwide to provide information on how individuals can protect themselves and each other, from violence and bullying.

According to UNICEF, BTS’s personal reflections have also helped children and young people who have felt isolated, disconnected and frustrated, as their routines, education, and downtime, continue to be disrupted by COVID-19.

“When it comes to promoting self-esteem and improving mental well-being, one of the most important things you can do is just to start the conversation. The groundbreaking way in which BTS has helped spark a positive message with its ARMY is simply unmatched and incredibly invaluable,” said UNICEF Executive Director Henrietta Fore.

“We are thankful for all the work the band has done to lead this important initiative, and for all of their support for UNICEF in the last four years.”

Earlier this year, BTS and BIGHIT MUSIC renewed their commitment to the campaign, pledging over $1million to UNICEF, as well as proceeds from the sale of LOVE MYSELF merchandise, and a portion of the album sales.

“We hope that the LOVE MYSELF message can continue to serve to invigorate everyone’s lives. We will be honored if all seven of us can continue this campaign to return the amazing love that we have received and give people the strength to come closer to LOVE MYSELF. We hope to keep doing what we are doing and voice what we are voicing, so we can help people find happiness and love”, BTS members said.