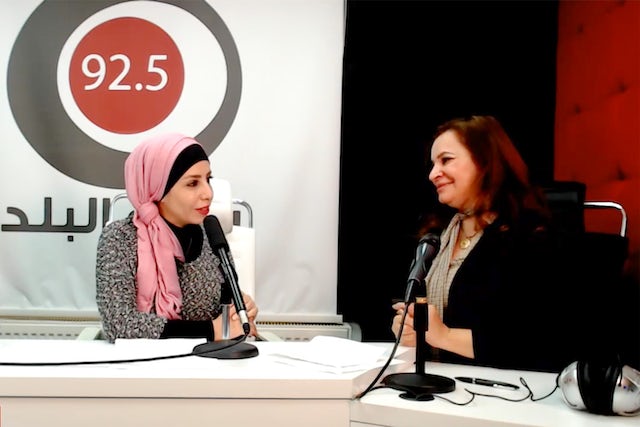 AMMAN, Jordan — When at the start of the pandemic the Bahá’í Office of External Affairs of Jordan initiated a discussion series among journalists and social actors about the media as a force for progress, the participants had not anticipated that an outcome of their conversations would be a new radio show providing a public forum for the exploration of how to lead a coherent life and be a source of social good.

The eight-week series of shows, which has now concluded, was produced by Radio Al-Balad in collaboration with the Office of External Affairs.

“We sought to bring hope and faith at a time when the global health crisis has intensified psychological pressures,” says Taghreed Al-Doghmi, an anchor at Radio Al-Balad.

“The show provided listeners from many different backgrounds an opportunity to reflect on the harmony between the spiritual and material dimensions of human life and to feel that, no matter how difficult things are at the present time, there is hope for the future.”

The radio program, titled “Body and Soul,” reached a wide audience and was well received, stimulating thoughtful conversations among listeners.

“This show helps you explore profound concepts and high aspirations that are largely absent from radio programs,” said a listener during a call-in segment of the program.

“It has the potential to produce a moment of collective societal awareness,” she continued, “and helps us to ponder on important principles for our lives, such as serving the common good, justice, and compassion.”

Tahani Ruhi of the Office of External Affairs attributes the uplifting and captivating atmosphere of the radio show to the many insightful conversations among the members of the Office and journalists that led up to the broadcasts, as well as the strong bonds of friendship that formed among them.

“We all became good friends over the course of the last year,” she says. “This gave the show its friendly and inviting spirit. The program was a reflection of the process that led to it.”

Mrs. Ruhi continues, explaining that the topics for the show were inspired by the themes that had been examined at earlier discussion gatherings, including the role of religion and media in fostering hope; overcoming divisiveness and promoting togetherness on social media; the importance of collective prayer among diverse people in creating solidarity; the concept of selflessness when serving society; the role of youth in serving their communities during the pandemic; and, the place of the arts in society.

Given the overwhelmingly positive response to the program, Radio Al-Balad and the Bahá’í Office of External Affairs are now preparing a new series titled “The Cycle of Life,” which will explore the higher purpose of life from childhood through adulthood.