A 3,200-year-old stone inscription telling of a Trojan prince from the sea people has been unraveled 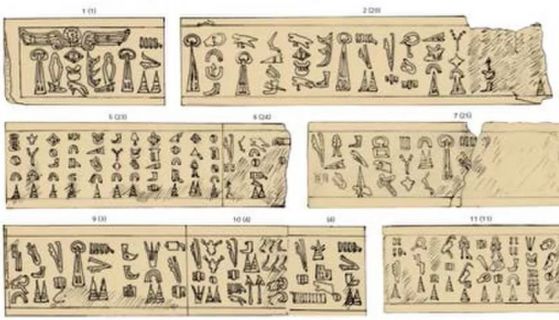 An inscription on a stone slab of 3200 years, which tells about a Trojan prince and who is from the mysterious sea peoples, was read, archaeologists announced yesterday, October 7, Live Science reported.

The 29-meter-long stone inscription describes the rise of a powerful kingdom called Myra, which launched a military campaign led by a prince named Muxus of Troy.

The inscription is carved in an ancient language called Luwian, which only a few scholars, no more than 20, according to some estimates, can read today.

Among these scientists are Eberhard Zangger, a geoarchaeologist who is chairman of the Luwian Research Foundation, and independent Dutch scientist Fred Woudhuizen, who has now read a copy of the inscription. Proceedings of the Dutch Archaeological and Historical Society. Sanger also published details of the new decipherment of the inscription in a book in German called “Die Luwier und der Trojanische Krieg – Eine Forschungsgeschichte,” (Orell Füssli, 2017), which was published yesterday, October 7.

If the inscription is authentic, it will shed light on a period when a union of nations, which modern scientists sometimes call “sea people” or “sea peoples,” is destroying cities and civilizations in the Middle East, scientists say. The Kingdom of Peace, which is involved in this military campaign, was apparently part of the alliance of these sea peoples and participated in the attacks.

The inscription tells of how King Kupantakuruntas ruled a kingdom called Myra, located in what is now Western Turkey.

Myra controls Troy, according to the inscription. He describes the Trojan prince Muxus, leading a naval expedition with which he managed to conquer Ashkelon, located in modern Israel, as well as to build a fortress there.

The inscription details the path of King Kupantakuruntas to the throne of Peace: His father, King Mashuittas, took control of Troy after a Trojan king named Walmus was overthrown. Shortly afterwards, King Mashuitas restored Valmus to the Trojan throne in exchange for his loyalty to Myra, the inscription said.

Kupantakuruntas became king of Myra after the death of his father. He then took control of Troy, even though he was not the real king of Troy. In the inscription, Kupantakuruntas describes himself as the guardian of Troy, begging the future rulers of Troy to “guard Vilusa [Wilusa – the ancient name of Troy] [as) the great king (of) Peace (does).” (Translated from Wadhausen)

The inscription itself no longer exists, it was destroyed in the 19th century, but transcripts, including a copy of it, were found in the mansion of James Mellaart, a famous archaeologist who died in 2012. Mellart discovered several ancient sites in life, the most famous of which is Chatal Hüyük, a huge 9,500-year-old settlement in Turkey that some scholars consider the oldest city in the world.

In the instructions left by Melart, he wrote that if the inscription could not be fully read and published before he died, other scholars should do so as soon as possible. Some scholars (not including Sanger and Wadhausen) have expressed concern that the inscription may be a modern forgery created by Melart or someone else.

Mellart briefly mentions the existence of the inscription in at least one article published in 1992 in the peer-reviewed journal Bulletin of the Anglo-Israel Archaeological Society. But he never described the inscription in a separate scientific publication.

According to Melart’s notes, the inscription was copied in 1878 by an archaeologist named Georges Perot near a village called Beykoy in Turkey. Shortly after Perot copied the inscription, villagers used the stone as building material for a mosque, according to Melart’s notes. After it became known that the inscription was used as building material for a mosque, Turkish authorities searched the village and found three bronze plaques with inscriptions that are now missing. Descriptions of the bronze tables have never been published, and Mellart does not know exactly what was written on them.

A scientist named Bahadır Alkım (who died in 1981) rediscovered the drawing of the inscription made by Pero and made a copy, which Melart, for his part, also copied and which the Swiss-Dutch team had already deciphered.

The last member of the team

Melart was part of a team of scientists who began work in 1956 to decipher and publish a copy of the Perot inscription, along with the now-missing bronze plates and several other Luwian inscriptions, Melart wrote in his notes.

Mellart says his team has failed to publish its work – most of the team members have died. Melart, one of the youngest members of the team, died at the age of 86, outliving the rest of his team.

The Swiss-Dutch team found that in his later years, Melart spent a long time trying to understand the images of various Luwian inscriptions available to him. But Melart cannot read Luwian – he was brought to the team because of his knowledge of the archeology of western Turkey, while the other members could read in the ancient language.

Does the inscription really exist?

Sanger and Wadhausen say it will be extremely difficult, if not impossible, for Melart or anyone else to create such a forgery. The inscription is very long, and Melart cannot read, let alone write in Luwian, they commented in their article. They also note that no one deciphered Luwian until 1950, which means that Perot could not falsify it. Sanger and Wadhausen add that only a few scholars today can read Luwian, and far fewer can write long texts. They said they also did not understand why Mellart would want to create a large-scale and complex forgery, but left it largely unpublished and unpopular.

Melart has never been found to have forged, Zanger and Wadhausen note, but until transcripts of the inscription other than those owned by Melart are found, we cannot be entirely sure that it is authentic and not a forgery.

Sea peoples are a group of Mediterranean peoples who began their migration in the thirteenth century BC. to the borders of Ancient Egypt and the Hittite state, probably from the Aegean Sea (Balkans and Asia Minor). The Trojan War is considered an episode of the migration of maritime peoples.

The very name “sea peoples” has Egyptian origins – so the Egyptians called in the XIV-XII centuries BC. hitherto unknown to them northern peoples living beyond the Mediterranean. The translation of the Egyptian term as “sea peoples” was first proposed in 1881 by the French Egyptologist Gaston Maspero.

They leave traces of their migration to tribes such as the Garamants, Siculi, Philistines, Phrygians and Etruscans.

Illustration: According to notes by James Mellart, this Luwian inscription was copied by archaeologist Georges Perot in 1878 in Beykoy, Turkey. The inscription dates back 3,200 years and discusses the rise of a kingdom called Myra and how it began attacks throughout the Middle East, destroying the Hittite empire along with other kingdoms. Photo: James Mellaart

Dr. Petar Gramatikov is the Editor in Chief and Director of The European Times. He is a member of the Union of Bulgarian Reporters. Dr. Gramatikov has more than 20 years of Academic experience in different institutions for higher education in Bulgaria. He also examined lectures, related to theoretical problems involved in the application of international law in religious law where a special focus has been given to the legal framework of New Religious Movements, freedom of religion and self-determination, and State-Church relations for plural-ethnic states. In addition to his professional and academic experience, Dr. Gramatikov has more than 10 years Media experience where he hold a positions as Editor of a tourism quarterly periodical “Club Orpheus” magazine – “ORPHEUS CLUB Wellness” PLC, Plovdiv; Consultant and author of religious lectures for the specialized rubric for deaf people at the Bulgarian National Television and has been Accredited as a journalist from “Help the Needy” Public Newspaper at the United Nations Office in Geneva, Switzerland.

Previous Article
Interfaith Declaration on Science and Religion Cooperation for Environmental Care
Next Article
UPDATE: Press briefing ahead of the EU-Ukraine summit in Kyiv, Ukraine

Persian rulers paid their workers with silver, not used slaves