IOM scales up aid at EU-Belarus border, as migrant hypothermia deaths tick up 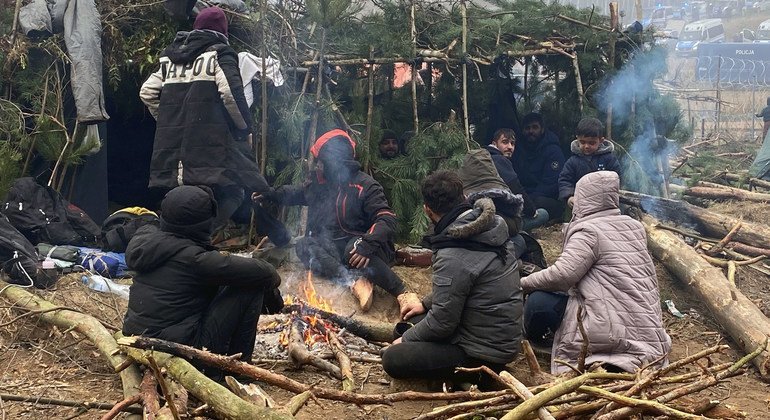 News deskhttp://www.europeantimes.news
The International Organization for Migration (IOM) and partners, are scaling up aid along the border between the European Union and Belarus, amid worsening winter weather, which is leading to rising deaths due to hypothermia among asylum seekers stranded there.
It is estimated that there are up to 2,000 migrants and refugees at the border with Poland, predominantly Kurds from Iraq, but also Syrians, Iranians, Afghans, Yemenis, Cameroonians and others. There are large numbers of women and children among them.

For António Vitorino, Director General of IOM, the “priority is the safety of these stranded migrants, upholding their human rights and preventing more deaths as temperatures remain well below freezing.”

“We are committed to providing humanitarian assistance and working with authorities on both sides of the border, and those who wish to return voluntarily will be helped by IOM to do so in a safe and dignified way,” he said.

The agency estimates the total number of migrants and refugees currently in Belarus at around 7,000. So far, only a limited number have expressed a desire to return home voluntarily.

However, in recent days, the Government of Iraq has organized the repatriation of over 1,000 of its citizens. Discussions with IOM to facilitate more voluntary returns are ongoing.

IOM should be providing a charter flight for all those remaining who wish to return to Iraq in the next two weeks. The agency explained that the process is taking longer than usual because of COVID-19 restrictions.

At least 44 people have so far been assisted by IOM to return home voluntarily, with another 38 in the pipeline.

In recent weeks, on several occasions, Belarusian authorities have granted IOM, the UN refugee agency (UNHCR) and the Belarus Red Cross, access to provide aid to those stuck in makeshift camps.

The agency and its partners used the opportunity to assess conditions and needs, distribute supplies, and help facilitate anyone considering returning home.

IOM was also able to provide aid in late October via the Belarus Red Cross.

Increasing numbers of migrants are moving towards the Belarus/Poland border., by Belarus Red Cross

Following the first visit to the Bruzgi border on 11 November, the agency secured food items, clothing and hygiene kits which were promptly delivered by the Red Cross. On 24 November those same recipients were supplied water and food.

Poland, as well as Lithuania and Latvia, which are all EU members, have seen an increase in the number of migrants, many from the Middle East, trying to enter their territories via Belarus in recent months.

The crisis has been brewing ever since the EU imposed sanctions against Belarus for cracking down on pro-democracy protests in the wake of the contested August 2020 presidential election, according to media reports.

The regional bloc also condemned the forced landing by authorities, of a commercial flight over Belarus this past May, and the subsequent arrest of a prominent dissident and journalist.

The EU has accused Belarus of orchestrating the migrant crisis in retaliation, which the country has denied.

Earlier this month, Poland deployed thousands of troops to the border after migrants attempted to storm into the country.