Houses of Worship: Preparations under way for centenary commemorations 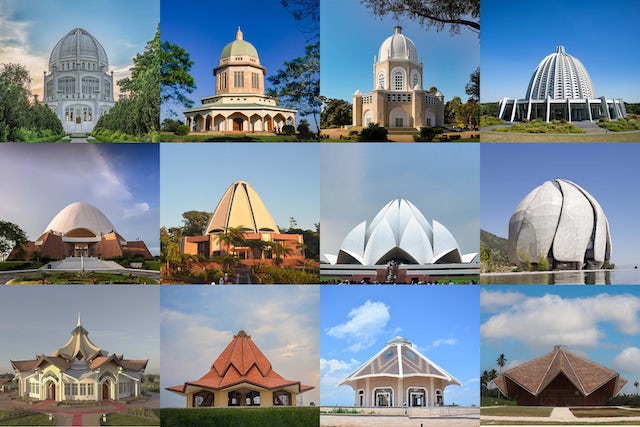 WILMETTE, United States — Preparations are under way at Bahá’í Houses of Worship around the world to commemorate the centenary of ‘Abdu’l-Bahá’s passing with special programs, exhibits, artistic presentations, and discussions on the temple grounds, exploring themes related to His life of service to humanity and His efforts to promote universal peace.

These temples have stood at the heart of their communities as beacons of hope, inspiring people to prayer and service, especially during the pandemic.

Among the Bahá’í temples around the world, the House of Worship in Wilmette, United States, has a unique connection to Abdu’l-Bahá—He was directly involved in its planning and placed its cornerstone during His historic sojourn in North America in 1912.

In a message that marked the hundred-year anniversary of that momentous day, the Universal House of Justice wrote:

“‘Abdu’l-Bahá, standing before an audience several hundred strong, lifted a workman’s axe and pierced the turf covering the Temple site at Grosse Pointe, north of Chicago. Those invited to break the ground with Him on that spring day came from diverse backgrounds—Norwegian, Indian, French, Japanese, Persian, indigenous American, to name but a few. It was as if the House of Worship, yet unbuilt, was fulfilling the wishes of the Master, expressed on the eve of the ceremony, for every such edifice: ‘that humanity might find a place of meeting’ and ‘that the proclamation of the oneness of mankind shall go forth from its open courts of holiness’.”

The following is a collection of images of Bahá’í temples and their distinctive designs, as well as an overview of plans for centenary commemorations at these places of worship and service.

In preparation for the centenary, people of all ages have been gathering on the temple grounds to hear stories about the life of ‘Abdu’l-Bahá. The program commemorating the centenary will include devotions, traditional songs, and artistic presentations by youth.

Over the coming days, local leaders and residents will be attending devotional gatherings held at this House of Worship. Many more centenary gatherings will also be held in Bahá’í communities throughout the surrounding area.

Plans at this House of Worship include prayer gatherings and presentations about ‘Abdu’l-Bahá’s contributions to social progress. On the night of the ascension, youth will share stories about ‘Abdu’l-Bahá’s life related to the themes of selfless service and love, and the following day, a children’s program will include craft lantern-making.

A program to honor ‘Abdu’l-Bahá will take place later this week, bringing together people from Kampala and the surrounding area to pray and reflect on ‘Abdu’l-Bahá’s writings on themes such as the equality of women and men, peace, and nearness to God.

Chiefs, local officials, village elders, members of different faith communities, and other area residents will be participating in a series of commemoration events at the local Bahá’í House of Worship in Matunda Soy. These events will culminate in a gathering on Saturday which will include a special performance by a local choir.

Residents of the neighborhoods surrounding this House of Worship, popularly referred to as the “Lotus Temple” because of its design inspired by a lotus flower, are gathering at the temple site for guided tours. Each tour includes a screening of Exemplar—the recently released film about ‘Abdu’l-Bahá—a viewing of an exhibit on His life, and a devotional program featuring prayers, music, and readings of quotations from the Bahá’í writings.

Mayors and city council members of nearby municipalities and other area residents will gather for a special program at this House of Worship to mark the centenary later this week.

Over the coming days, special programs arranged by local Bahá’í institutions will be held at the site of this House of Worship. The program will include prayers put to music by children, stories told by youth, and talks on themes addressed by ‘Abdu’l-Bahá, such as the oneness of religion.

Guided visits are planned for the coming days, which will allow visitors, including many who are participating in Bahá’í community-building activities, to learn more about the life and work of ‘Abdu’l-Bahá. The temple choir has prepared new compositions that sets to music passages from ‘Abdu’l-Bahá’s Will and Testament. These compositions will be presented as part of centenary programs throughout the week.

Several gatherings marking the centenary are planned for this week, including gatherings for prayer, a special program for children and parents to hear stories about ‘Abdu’l-Bahá’s love for all people, and discussions on the theme of service to society.

This recently inaugurated House of Worship, the first local Bahá’í temple in the Pacific, will mark the centenary with a devotional program. Attendees will include traditional chiefs, members of diverse faith communities, youth, and children.